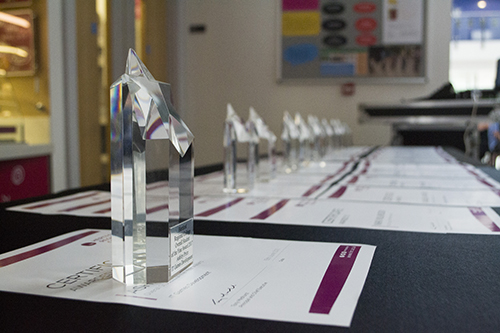 Hertford Regional College (HRC) hosted the very first of its new style Further Education Awards on Thursday 15th June 2017. The awards ceremony, which was held at the Colleges Broxbourne Campus, celebrated the success and achievements of HRCs students and staff.

The evening, attended by a number of local dignitaries, is just one of the highlights of the College academic year, provided an opportunity to bring students together to celebrate their success.

The awards started with HRC itself being recognised by YMCA as a Platinum Partner under YMCAs partner programme. The award, presented by YMCA, highlights the quality of HRCs Fitness Instructor and Personal Training courses. HRC are the only Further Education College in the UK to hold platinum award status.

Both students and staff eagerly anticipated the Students Awards; they were a culmination of months of nominations and wider preparations. All of the award winners were personally selected by their tutors because of their demonstration of excellence, dedication, ambition and support during their time at HRC.

In the run-up to the awards students had also been voting for the Staff Awards, with students nominating the members of staff they felt had truly supported them during their studies. Staff Award categories included most caring, supportive and most engaging Teacher.

The top award of overall Student of the Year went to IT & Games Development student Ashley Prior. Ashley’s tutor Matthew Smith nominated him “Ashley is prepared to support any student and help manage the class when needed. Ashley has supported the college by attending additional events and has raised money for charity. On top of that Ashley has 100% attendance and is an amazing young man.” This award made Ashley a double-winner on the night as he had also collected the prize for the category of Most Supportive Student earlier in the evening.

Ashley said; “Before HRC I felt a lot of stress about choosing a career, but when I joined I found my comfort zone with other students who are on my wavelength and amazing tutors”.

Speaking after the awards ceremony, HRC College Principal and Chief Executive Tony Medhurst was delighted for all the winning students and staff. “I found the evening inspiring, as I always do; I never tire of hearing about our students and staff’s achievements. They are an inspiration to us all and I wish all our students very best for their future destination. Whether that is staying with us in their further studies, going to university, starting an apprenticeship or getting that all important job. Our role at HRC is to ensure that they are prepared and ready for that next step.”

On the night, eighteen awards were presented to both students and staff from across the college.