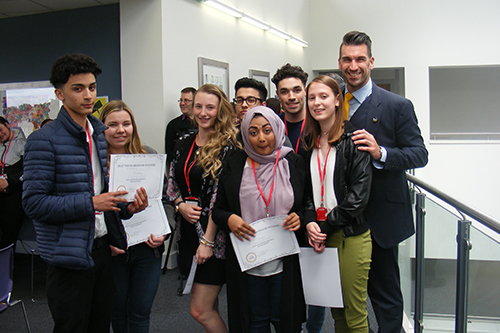 As any business professional knows, pitching a proposal to an audience can be nerve-racking. But what if that audience features Lee McQueen, winner of BBC’s The Apprentice and founder of Raw Talent Academy?

This is exactly what Level 3 Business students from Hertford Regional College (HRC) faced after weeks of preparation for a ‘Beat the Boardroom’ challenge. Beginning in May, the students were tasked by Lee during a series of workshops to form teams and create a business idea that could bring real-life revenue to HRC. The culmination of their hard work came a few weeks later, with a Dragons Den-style final presentation to the judges, featuring McQueen, HRC’s Principal & Chief Executive Tony Medhurst and a panel of their peers.Team Forward - Leap with HRC 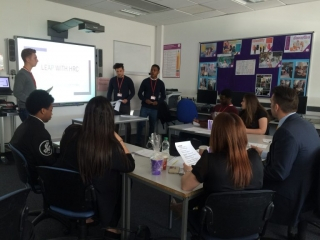 The judges were treated to a range of business proposals including a driving school for HRC students and a smoothie and shake bar. However, the winning idea that wowed the panel was put forward by Team Soliloquy, which involved creating an in-house cinema located within HRC’s Michael Morpurgo theatre.

McQueen was particularly impressed with the professionalism and financial projections of all of the teams, saying “I’ve been blown away by the business acumen all of the groups have shown. They have all walked in with realistic, and most importantly credible, business plans that could all be implemented in the college. Their confidence and presentation skills were also impressive and I have enjoyed working with the college and the students.”

Team Soliloquy were delighted to be named winners, earning themselves a special lunch with McQueen as their reward. On behalf of the team, Team Soliloquy spokesperson Zola Copeland-Monehen said “working on the project with Lee McQueen was really exciting and an excellent opportunity to put our business skills to the test!”

Wondering what other ideas were presented to the judges? Here’s a round-up:

To find out more about studying Business with HRC, click here.